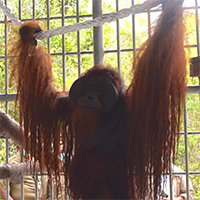 On Monday, April 23rd, the adult male orangutan “Jono” who was featured on ABC’s Foreign Correspondent episode “The Baby Trade” and a young male sun bear “Buddy” arrived in Pangkalan Bun, Central Kalimantan (Kalimantan Tengah) in Indonesian Borneo. Their lives, to date, have been marked by deprivation. Orangutan Foundation International (OFI) Founder and President, Dr. Biruté Mary Galdikas, OFI veterinarian, Dr. Ketut, and accompanying OFI staff were met at the Jakarta airport by Forestry officials, ready to assist in the transfer of the new “guests” to Kalimantan (Indonesian Borneo). The two animals would find a new start at OFI’s Orangutan Care Centre and Quarantine in Kalimantan Tengah.

Jono, now approximately seventeen, was discovered “by mistake” in Kumon, south of Jakarta. Femke Den Haas, the cofounder of Jakarta Animal Aid Network (JAAN) explained that JAAN had been on a call to see about other animals, but “accidentally Jono was seen at the owner’s house!” Kept as a pet since he was a baby, he was at this time a subadult orangutan. As it is illegal to keep an orangutan as a pet, attempts were made to confiscate Jono. Two weeks after this initial discovery, Jono escaped.

“The owner immediately panicked and called JAAN. The deal we made was that if we found him, we would keep him,” Den Haas explained. Jono was found roaming the streets of Jakarta and then taken to a government wildlife rescue station for confiscated animals. He was placed in a cage no bigger than a transport cage, and kept there for six years, without sunlight or access to drinking water, and little to engage or stimulate him.

In 2017, Jono’s living conditions were shown to the world by the Australian Broadcasting Corportaion (ABC News), causing a groundswell of sympathy and support to improve his life. Working with Indonesia’s forestry department, JAAN took this as an opportunity to complete a health check and DNA evaluation for Jono, revealing he was from Indonesian Borneo. The plan was made to send Jono home to OFI’s Orangutan Care Center.

Dr. Galdikas has confidence in Jono’s future return to the wild. “He is young…he has time,” she told ABC News, “The Indonesian government and JAAN have to be also recognized for their work. This was a cooperative process; that is the beauty of it.”

On the same day of Jono’s departure for Kalimantan, OFI received Buddy, a Malayan sun bear who had been found mutilated, with claws removed. Just a year old, the cub was discovered in August of 2017. Soon, forest trips and daily foraging will be a regular part of Buddy’s routine at the Care Center. But due to his physical handicaps, he will be a permanent resident under OFI’s care, with plans to build a forest enclosure mirroring a life in the wild.

Once at the Care Center, both Jono and Buddy needed little encouragement to explore their new enclosures. As the transport cage doors opened, Jono swept into the space with a blast of energy. He handled branches for the first time in years. He stretched his mighty arms on the ropes, and appeared to marvel at the height of his enclosure. The specialized enclosures are equipped with enrichment equipment for Jono to climb and swing from, encouraging natural behavior. With their newfound homes offering sunlight, food, water, and specialized care, Jono and Buddy begin the next chapter of their journey with the loving support of OFI staff and well-wishers from around the world.