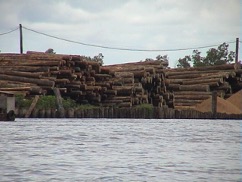 The fall of Indonesian President Soeharto’s regime in May 1998 was followed by a period of political and economic instability. As Dr. Galdikas stated at the time, “After [Soeharto’s] government was toppled, there was a power vacuum at the center, and many people realized very quickly that they could now do whatever they wanted.” Illegal loggers started entering Tanjung Puting National Park and other protected forests in droves. Quickly, illegal logging outpaced legal logging. In contrast to the decades before, this new illegal logging was commercial in scale, organized and orchestrated by elite people who had no fear because of their strong government connections and their ability to pay people off. Some of them were even in the military.

The main target of the illegal logging boom in Tanjung Puting was ramin, a slow-growing hardwood tree that occurs mainly in swamp forests. Hundreds of laborers were brought in from islands across Indonesia, particularly Java, to make up the workforce of the Tanjung Puting illegal logging machine. These laborers withstood terrible conditions, living and working for sometimes months on end in the mosquito- and leach-infested swamps. Reports made by the Environmental Investigation Agency found that laborers were paid about $2.20 for each cubic meter of ramin felled, while the timber barons sold a cubic meter of ramin for as much as $1,200 once the ramin reached processing centers in Java. The Camp Leakey study area remained safe thanks to OFI’s strong presence and the general attitude of local people that Camp Leakey was beneficial to their communities because of the local employment it provided and the tourism that it brought in.

Illegal loggers in the center of Tanjung Puting and the wood they cut, shaped, and took out of the Park

To reach trading ports, illegal timber had to be transported down the major river systems leading out of the National Park. Illegal logging operations were highly visible to shocked foreign tourists and to local authorities and communities, but corruption, indifference, and even fear of intimidation prevented proper enforcement. The most powerful timber baron operating illegally in Tanjung Puting had strong relationships with both local and national political leaders. In 1999 this baron was even appointed to the upper house of Indonesian Parliament as a representative for Central Kalimantan, the province that is home to Tanjung Puting. The power struggles that arose during these lawless times increased local ethnic tensions and led to a period of great community violence and murder at the turn of the century.

During this time, Dr. Galdikas spent her days fiercely campaigning to stop the illegal logging before it decimated Tanjung Puting National Park, local forests, and the orangutans within. She met with governors, Cabinet Ministers including the Minister of Forestry, local legislators, various government officials, conservation activists, political activists, local indigenous Dayak leaders, timber barons, illegal loggers, and many others to try to encourage accountability and build coalitions to protect the besieged forests. She collaborated with activists to survey Tanjung Puting and document the intensity of the illegal logging. In Fall 1999 Dr. Galdikas wrote, “Along the Buluh Besar River it seemed that there was an illegal logging camp every 50 meters. There were approximately 50 km of illegal rails for taking out logs.” Dr. Galdikas sent documentation of this catastrophic illegal logging to Indonesian intelligence agencies, government officials, and local media outlets.

On August 17th, 1999, Indonesian President Habibie (who had just taken power after President Soeharto resigned) sent a warship and two other Navy ships to Tanjung Puting National Park. These military forces immediately seized three barges loaded down with illegal timber taken from Tanjung Puting. A hundred Indonesian Marines began patrolling the National Park at the instigation of the national government. The illegal logging stopped cold for a period of time. But as military presence waned again, the illegal logging and the corruption ramped back up. Ultimately, Dr. Galdikas, OFI, and conservation-minded officials, organizations, and individuals continued the fight against the corrupt illegal logging boom well into the 2000s.