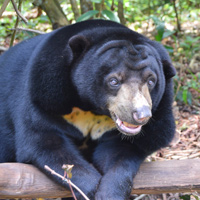 An urgent call, a life on the line. Dr. Galdikas took the call in Pasir Panjang, Central Indonesian Borneo.This is how Hilda’s involvement with OFI came to pass. Since OFI took in its first sun bear, Desi in 2008, it was almost inevitable that more would follow. In 2012 an informant tipped off OFI that a neighbour of theirs was harboring a Sun Bear and was in the process of arranging a transaction with a Korean businessman. The plan was to harvest the Sun Bear’s organs and bile for use in Traditional Chinese medicine. In Asia approximately 12,000 bears are farmed for their bile and kept in terrible conditions. Life has a price for these parts and in this case, $1000 USD was the price to be paid for the bear’s life.

Dr. Galdikas and the OFI immediately sprang into action, alerted the police, and the bear was confiscated and brought to a place of safety, OFI’s Orangutan Care Center and Quarantine (OCCQ). This is a place where the bear would be able to stay intact – and there is a lot of her to stay intact. Hildegarde (Hilda for short) arrived as an already very well fed bear; she was probably overfed to increase her size. Sun bears are eaten in certain parts of Asia. Hilda would provide a big meal for someone willing to pay enough.

If one were to look at Hilda even now, one could be led to believe she is just about ready for hibernation, but unlike the North American Black Bear, Sun Bears don’t hibernate. They have no need in the tropical rainforest as there is no winter. One attribute that gives away the fact Hilda is a Sun Bear is her distinctive chest patch which covers the majority of her upper body. Every Sun Bear’s chest patch is different but Hilda’s stands out for its uniqueness. A Rorschach picture locked within a lava lamp, there is always some new facet to explore when she affords you a look.

After her arrival Hilda was housed with the first Sun Bear at OCCQ, Desi, and the two are now the elder stateswomen of the OFI bear facilities, occupying a one-hectare forest enclosure together. Hilda and Desi are virtually inseparable with their bond growing deeper over the years; they represent to each other that special friend that one finds late in life. They are the two little (little being the operative word) old ladies that stick close together, watching each other’s backs. Where one leads, the other will follow. Since Hilda is a big bear it is important to make sure she gets plenty of exercise. One way of doing this is through sensory enrichment. Spices such as ginger and cinnamon are soaked in water and then sprayed around the enclosure to provide new and exciting scents to explore. They are sprayed high and low to make sure Hilda covers as much ground as possible.

Hilda is a very open and friendly bear. But on occasion she does remind us that she is not to be taken for granted. Although she has occasional mood swings, these mood changes normally occur only around feeding time when she impatiently marches back and forth. There was one day in recent months when the OFI staff had not seen her return from the forest enclosure for either the morning or afternoon feedings. There had been no sign of her all day and it was most unlike her not to come back for meals.

Venturing into the forest enclosure, worried OFI staff went on the hunt to find her. While the bears don’t normally mind having visitors, it is unusual for the staff to regularly enter the forest enclosure unless they are walking around to check the perimeter or cut back vegetation. After storms and heavy rain, it is imperative that the sides of the enclosure are checked for fallen branches that could provide an escape route.

It would be nice to have the bears be able to roam wherever they please but outside the safety of their hectare enclosure, there are towns and villages full of humans who are unwilling to have wild bears near them and react with hostility. In other cases, humans are very dangerous to bears encountered because bear parts are so valuable. Hilda has never been a problem with her caregivers. When cleaning the indoor enclosures, staff can enter to give the facilities a hose and scrub down, even if Hilda is present. She offers no trouble.

Back to Hilda’s whereabouts: within the forest enclosure there are plenty of areas for her to hide. There are large trees, either fallen over or reaching up to the sky; passion fruit trees march along the perimeter and ferns shroud the forest in mystery. Calling out for Hilda yielded no results and when staff walked further into the forest there was silence. Hilda does not regularly climb up into the canopy so eyes were cast firmly down, scanning the ground for a hint of any movement. Sun bears’ dark fur provides good camouflage from the untrained eye.

All of a sudden with a crack of twigs and heavy breath, from within a large hole in a mound of earth, emerged a hulking mass covered in dirt. This was Hilda, disturbed from her slumber. She had spent the whole day digging a den into the earth to escape the heat of the day. Due to her size and the fact she has dark fur, the heat does bother her. Sun Bears are like dogs and do not have sweat glands, rather panting repeatedly to cool off or submerging themselves in water. They are in the same family as North American Black Bears, and their fur can get upwards to 185 degrees Fahrenheit on a hot day, so imagine how living in the Bornean tropical rainforest must feel.

Hilda is a bear who vocalizes a lot; clucking like a mother hen when she approaches. This is a signal of peaceful intentions and friendship. This time was no different. After offering some watermelon to appease Hilda, the OFI staff beat a hasty retreat but she was happy with her hand-delivered food. From that day on when Hilda repeated her disappearing act, people knew where to look – in her favourite place to stay comfortable and cool: her makeshift hovel. After not seeing Hilda climb or dig for a while, it was a delight to see that she had kept herself busy with a little project. She is a pretty smart bear and when she sets her mind to a task, she will see it through.

Hildegarde is one that everyone remembers, she is a big bear with a big personality. We are thankful she has had a chance to live out a peaceful life within the OFI’s bear sanctuary, escaping the fate that too many other bears in Asia encounter: death or torture for their organs. Thankfully, the quick response of the OFI team and the police ensured that Hilda was one of the lucky ones.