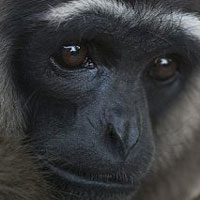 Our adventure in Indonesia started with a trip to Jakarta. We were greeted by an (un)healthy dose of heat, noise, and smog and endured a week of frustrating, but necessary, red-tape, government officials (more often behind ping-pong tables than desks), and hair-raising taxi drives in order to validate our LIPI research permits. Eventually we received the go ahead to conduct our research and excitedly booked flights to Kalimantan (the Indonesian half of Borneo), enjoying our last night in Jakarta with an impromptu street party known as “Jalan Jaksa Day.” 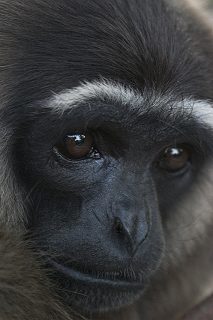 Before going into too much of a mundane travelogue, we should really introduce ourselves. We are both Zoology students from the University of Edinburgh, UK, and have just completed the fieldwork for a project researching the possibility of dialect in the “Great Call” of the female Bornean agile gibbon, Hylobates agilis. Agile gibbons are small arboreal apes, endemic to certain areas of Southeast Asia, including Central and West Kalimantan. Our project involved traveling to three geographically isolated areas; the Sebangau (near Palangkaraya), Camp Leaky (Tanjung Puting National Park), and Cabang Panti (Gunung Palung National Park), where we have recorded a number of females, which we will later statistically compare for the presence of dialect.

Gibbons are monogamous and highly territorial. Their early morning (around 4:30 a.m.) vocalizations are believed to act as a spacing mechanism to enforce territorial boundaries. The male starts with a series of loud whoops and is later joined by the female to produce a beautiful duet. The Great Call itself is an evolutionary conserved song, consisting of a series of introductory notes proceeded by one or more “screams” at its climax. The male completes the song with a vocalization pattern known as a “coda.”The whole song can be displayed visually with an audio spectrogram (we use wavesurfer software), then different aspects of the call such as duration, pitch of climatic note, and number of introductory whoops, can be compared between individuals and areas.

Want to hear the sound? Download the gibbon call below.

The scene is set. It may sound romantic so far, but the reality of 4 a.m. wake up calls, sweaty trekking, and stumbling through dark jungle definitely had its moments! Not to mention the variety of non-gibbon sounds that have cropped up at precisely the moment we start to record our chosen gibbon. Orangutan long-calls, red-leaf monkey alarm calls, screeching cicadas, beating wings, hoarse roars of hornbills, rumbling bellies, and a huge variety of birds and insects all seemed to be actively seeking the microphone for their brief moment of fame.

Before we analyze the data statistically, we cannot say whether dialect does exist or not, but we can reflect on the amazing places we have been privileged enough to visit. All three forests have proved beautiful, diverse, and in massive need of the untiring efforts of NGOs such as OFI to protect them. We were lucky enough to stay in Camp Leaky, to be looked after by all the helpful assistants there, to visit the Orangutan Care Center and Quarantine Facility in Pasir Panjang, and to talk with Professor Galdikas. Whilst in Camp Leaky, we were initially bemused when Princess ambled past with little Percy in tow, but soon got used to the array of orangutans hanging around. Each has their own personality and eccentricities, and despite attempting to eat our minidisc player, Siswi became one of our favorite orangutans.

The Care Center was a real eye-opener. The sheer number of confiscated orangutans is shocking, and with illegal logging and clearing forests for palm oil plantations on the rise, the situation looks set to worsen. Monumental efforts are being made, but without continued support and increased pressure on the people who are destroying the forests on such a large scale, the future for orangutans, gibbons, and other wildlife looks grim.

We would like to thank all of our sponsors and individuals who have supported the project both in field and in the UK. We will be exhibiting some of our expedition photographs (many of which are orangutan shots from Tanjung Puting!) in Edinburgh, sometime in the New Year. If any one wishes to contact us about this project or the exhibition, please do not hesitate to get in touch.