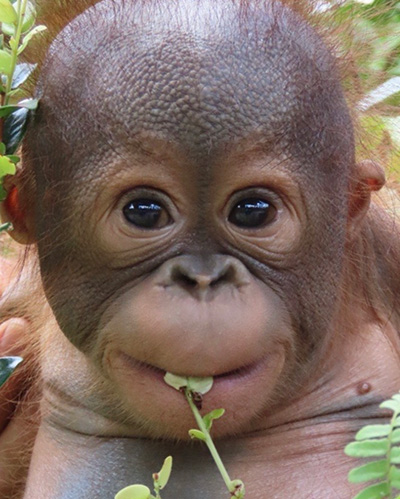 For the last 51 years, Orangutan Foundation International (OFI) has been working to save orangutans and their endangered tropical rain forest habitat. Without forest, wild orangutans cannot survive. During the past years we have made tremendous progress protecting wild populations of orangutans and forests in Borneo.

But it is not enough!

Unfortunately, in many ways the situation is worse than it ever has been previously for orangutans, their Bornean habitat and wildlife. Rain forests that were long considered “carbon sinks” are becoming net sources of carbon dioxide. Massive deforestation, habitat degradation and fragmentation, drought and fire, have decimated forests in Borneo. We at OFI have seen the devastating effects of massive deforestation first-hand. In Central Borneo (Kalimantan Tengah), where we work, we lost about a third of the Orangutan Legacy Forest to the destructive wildfires that swept through Borneo in 2015 and 2019.

The massive fires of 2015 were so devastating to orangutans and their habitat that IUCN raised the status of Bornean orangutans to that of a “critically endangered species” which is the last category before extinction.

We established our “Seed and Sapling” program in 2016 and started re-planting deforested areas in 2017.

We are restoring areas of the Orangutan Legacy Forest as well as other areas where forests have been lost to illegal logging, to agribusiness, including palm oil, and, most of all, to massive fires that have been so pervasive in Borneo during the last few decades. In the five years between 2017 and 2022 our eight person OFI re- wilding team of indigenous Dayak staff have planted over half million trees, most of which have survived.

Our forest restoration program represents a good beginning. But in the meantime, we continue receiving the orangutan babies of mothers killed in present-day plantations and in forests being opened up for industrial agriculture. A few months ago, we received, among others,“Koling,” a tiny infant less than a year of age. (Please see his picture left.) He has found surrogate mothers among the OFI staff at our Orangutan Care Center and Quarantine orphanage. He receives 24-hour care from loving caregivers and the benefit of our local veterinary staff’s constant attention. For now, he is doing well.

Wild orangutan males begin leaving their mother at about ten years of age and start roaming away from her home range. But what happens when orphan Koling reaches that age and returns to the forest from which he was abducted when his mother was killed?

There is a saying that the “best time to plant trees is now but the next best time is 20 years ago.” I actually started planting native trees many years ago on a personal scale. But we started a formal OFI Forest Restoration Program in 2016 when the situation became dire after massive fires. Some of the half million trees OFI initially planted are now twelve feet tall!

Tree-planting in the equatorial sun is hard and laborious work. To plant thousands of seedlings and saplings by hand so that a forest will grow on many acres of open field or wet tropical swamp may take months of excruciating work in the blazing sun and humid heat of the tropics. This is the reality!

However, we need to do more!

Will there be any forest left? Any forest at all? Make Donation to save Orangutans and their habitat

When Koling and his orphan orangutan friends reach maturity and return to the wild, there needs to be forest. Orangutans are the world’s largest arboreal animals who need the forest to survive. Our forest restoration program is mitigating forest loss. We need to intensify and expand this program. Your help is needed to hire more staff, acquire motorized equipment to transport (by land and water) thousands of saplings and seedlings to denuded areas, build and maintain seedling nurseries, feed and house the forest restoration teams in the field, locate and collect seeds and seedlings under wild fruit-bearing trees, and acquire the supplies needed to prepare the land for planting. The list goes on and on.

We urgently need your help to preserve and restore the forests of Borneo so that we can save and protect the future of all orangutans, such as Koling. In so doing we also help save and protect ourselves.

Help us save his rainforest habitat