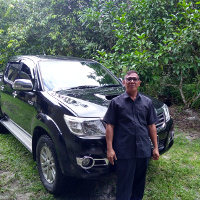 It is the middle of the night on the middle of a dirt road intersection somewhere in the middle of Borneo. On occasions like this you need someone with encyclopaedic knowledge to get you from A to B. Enter the drivers of the Orangutan Foundation International (OFI). These individuals know the roads of Central Borneo like the back of their hands. While driving cars and trucks is not the most glamorous job in the organization, it is no less essential. These are the people with the know-how and the willingness to drive all hours when necessary. All have a smile on their faces and a can-do attitude. They are not only drivers They are also multi-faceted individuals, each shouldering heavy responsibilities, be it taking enrichment teams to pick up newly arrived, badly needed supplies or veterinarians delivering blood samples to the local hospital for analysis.

A lifelong resident of Pasir Panjang, Pak Biar is a long term OFI employee. Initially working as an assistant at Camp Leakey, he has been Dr. Galdikas’s primary driver for some years. (While Dr. Galdikas drove herself for many years, she prefers not to do so anymore in Borneo). Always immaculately turned out in OFI’s navy blue safari uniform and ready at a moment’s notice, Pak Biar is ever reliable and dependable. He is much more than just a driver as he keeps his ear to the ground and is knowledgeable about happenings in the local community. After many years with OFI he is also a proud father as his son, Pak Erwin, following in his father’s footsteps, works at the OFI herbarium assisting with OFI’s reforestation program. As others make their way into the forest by boat from the dock at Kumai after being driven to Kumai, Pak Biar himself waits behind in the sun on land with his vehicle for them to return to the dock at Kumai for the ride back. It’s exhausting waiting for the boat to come back from Camp Leakey but he is content knowing it’s all for the greater good. He wouldn’t turn down a nice refreshing drink of coconut juice either.

Pak Abeng has been with OFI for the past 8 years. His family origins, interestingly, are with the Iban tribe in West Borneo, renowned as the most famous head-hunters of Borneo. But instead of taking heads he takes fruit in the back of his pickup to the outer camps of OFI. This also includes taking the weekly “logistics” to Kumai, the port linking Camp Leakey to the world, where supplies are picked up and taken to Camp Leakey by boat. These weekly logistic runs include all the supplies, food, and materials that the staff and orangutans at Camp Leakey will need for the coming week. A vital lifeline from the mainland! Pak Abeng is usually a phone call away for whatever is required. An orangutan may need to be taken for medical care to OFI’s Care Center with its veterinary hospital or some construction repairs need to be undertaken at one of the outer camps and building supplies need to be delivered. Whatever the need, Pak Abeng is more than happy to drive out. He taps merrily on the steering wheel of his vehicle as he listens to his favourite “dangdut” music. It is also a family affair for Pak Abeng as his wife, Ibu Iis, works closely with the orangutans at the Care Center, taking orangutan juveniles out on daily releases. Like many drivers in the sweltering tropics of Borneo, Pak Abeng always has a big bottle of water in his pickup to keep him hydrated throughout the day.

To foreigners “Bawor” may sound like “Bawa” which is Indonesian for “bring”. A foreign visitor once remarked that it was entirely appropriate that “Bawa” was Pak Santoso’s nickname as he brings just about everything you can think of in his truck. In reality “Bawor” has a different meaning in the Indonesian and Javanese languages but the incident provided a good laugh and a good example of linguistic misunderstanding and mispronunciation! Pak Bawor is originally from Java and is a relative newcomer compared to the indigenous Pak Biar and Pak Abeng but he gives them a run for their money. It’s not a competition but it is said that he is the fastest driver for OFI. This comes in handy when having to drive out to other towns that can be over 4-10 hours away from the OCCQ, for instance, to pick up an orangutan who needs rescuing. When he is around the Care Center Pak Bawa helps maintain the generator and electrical wiring. He also takes staff out daily to collect branches that are handed out to the orangutans at the Care Center every evening for nest-building in their sleeping enclosures.

Pak Bawor recalls one particularly memorable occasion two years ago: “I found what I thought was a cat on the side of the road by the Care Center. I stopped to pick it up and when I gave it to Dr. Popo (OFI Veterinarian) I realized it wasn’t a cat but a tiny baby sun bear!” Thanks to Pak Bawor, this baby sun bear, named Bubu, two years later, is now living a healthy life, wild and free in Tanjung Puting National Park. Pak Bawor likes his coffee “hangat,” (warm), not too hot nor too cold. We still don’t know exactly how baby bear Bubu ended up on the side of the road in front of the Care Center!

The tasks the drivers of OFI perform in Borneo are not mutually exclusive. When one driver is not available, another steps in. They co-ordinate accordingly and all take care of their respective vehicles. Mostly unsung and behind the scenes, these humble men do what needs doing. In some cases, without them on hand the whole operation would not even get moving and so to them, the drivers of OFI, we are eternally grateful.