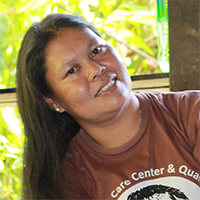 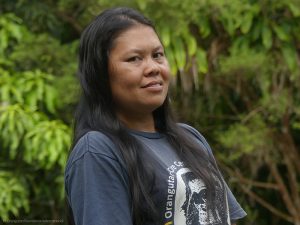 We all know that person around the office. Always on the go, they move like a phantom through the corridors; rewarding us with a bright smile before disappearing into the ether. This month we snatch a rare moment with Ibu Sumi, OFI’s very own friendly and busy staff member.

Ibu Sumi is the Deputy Manager at OFI’s Orangutan Care Center and Quarantine (OCCQ), and a self-proclaimed “freelancer”. “Oh this and that” she says modestly, when pressed for her exact job description. “This and that” hardly begins to cover the breadth of her work. Ibu Sumi is important to OFI’s day-to-day activities. One only has to glance at the mountains of coconuts, bananas, and other fruits and vegetables that arrive at the gates every day, waiting to be distributed, to know that it takes a skilled, experienced logistician to feed hundreds of hungry primates and humans. Ibu Sumi’s connection to OFI runs deep and wide. It is a cause close to her heart, and the fact that a number of her family members support the organization through various jobs is a source of comfort.

There is a relaxed and tranquil air about Ibu Sumi, belying the heap of work she must organize each week. Her long black hair is always swept back in a tidy ponytail; her fingernails are neat and short. Everything about her suggests quiet efficiency and attention to detail. Where does her orderly touch reach? “Everywhere” she laughs, gesturing widely. She ensures that OFI’s numerous forest sites have the supplies they need. OFI camps dotting the banks of the black water Sekonyer River depend on Ibu Sumi for their resources. For the more isolated orangutan release sites and forest guard posts, a shipment from Ibu Sumi comes every week or two and feels like a delivery from a long-lost family member.

What binds this curious, energetic Dayak woman to an orangutan care center? “Sometimes I think it’s funny,” she concedes, “but I am very interested in orangutans and their lives. I really love orangutans.” Her career path became obvious when she was a volunteer, when an infant orangutan was rescued and brought to OFI’s care center when Ibu Sumi herself was very young. Little Montana, a partially disabled orangutan infant, charmed Ibu Sumi. Her actual words are that Montana “made [her] in love,” as if a spell beyond her control had been cast upon her. (Montana is now a fully cheekpadded flanged adult male).

Ibu Sumi started working at OFI in July 1995. She was accepted as a volunteer at OFI when on holiday from high school. She took her tenure seriously and her bond to OFI became more apparent when she moved away from Kalimantan, to study English. “People thought, if I went away for University, I would change my mind. But it just made me miss orangutans even more. In Yogyakarta I would go to the zoo. I would ask the keeper hopefully, ‘are there any orangutans here?’ If I saw orangutans, it would make me happy. My friends would joke ‘ahhhh you are missing your family.’ They were right, I was there every Sunday,” she says affably.

Why did she want to study English in University? It wasn’t an immediate love affair, she admits. In school, she hated English class and paid little attention to lessons. After spending a summer working at OFI’s Camp Leakey, however, the value of speaking an international language was obvious. “Many people from all over the world know Camp Leakey” she declares, “I became interested because of Dr. Biruté (OFI’s President, Dr. Biruté Mary Galdikas). Many guests came to visit her, and I would be with her and would hear them all talk in English. There were also international volunteers at OFI. It was interesting. I realized I needed to learn.” By graduation, she was a linguistic convert. A three-year diploma in Engish from Yogyakarta followed. Curious and ambitious, Ibu Sumi also studied Spanish.

Ibu Sumi loves many aspects of her job. A highlight is spending time at Camp Danielle, a facility at OCCQ, playing with infant orangutans. She goes there when she has the opportunity. With animals always in her heart, Ibu Sumi’s outlook changes with the seasons. When Kalimantan’s interminable rainy season begins, she feels for the orangutans. “They can’t go out as often into the forest! And babies need to play,” she says matter of factly. Ibu Sumi cares for many, even during her time off. She relies heavily on her siblings to take care of her elderly parents. “I am very lucky to have them” she muses. Married to an OFI veterinarian, she can talk about orangutans well into the night. If her husband is caring for a particular orangutan, Ibu Sumi wants updates.

On her dream vacation, she would have a chance to encounter the whole animal kingdom. “I need to visit other countries! I need to see other animals, not just Indonesian ones!” Another ambition is to visit OFI offices in other parts of the world, to see how they operate. She considers it everyone’s responsibility to become educated about the state of our planet. “Our activism has to start now,” she says, eyes downcast as she holds a book on the environment. “I am working for the orangutans. For the future, I am very hopeful that every single orangutan can be in the wild. And none are in captivity.” She says emphatically. “It is the dream.” Perhaps that is what keeps Ibu Sumi flitting between a fixed office and the expanses of Kalimantan. She knows that the temporary home of many wild born ex-captive orangutans who are being rehabilitated is at OFI’s Care Center, but for many orangutans, the real process of life and survival will start once they are back in the wild.

Orangutan Of The Month: Anna with the Striking Eyes