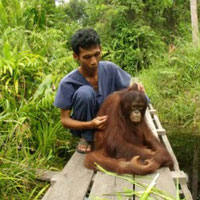 Doctor Prima doesn’t have a favorite orangutan at the Care Center because it would, in his own words, “not be fair, as maybe I would give one orangutan better treatment than the others.” As Dr Prima explains this, he uses two pencil cases to make his point as one looks more worn than the other. Illustrating a situation using random objects or drawings is a very Indonesian thing to do. After all, who hasn’t seen old men bunched together, bending over a patch of dirt and using sticks to clarify their words with sketches on the ground? I often find Indonesian-style explanations difficult to follow, but Dr Prima provides an exception. He does a good job of explaining how he ended up at OFI’s Orangutan Care Center and Quarantine (OCCQ) after studying chickens at university.

Most of the universities in Indonesia are located in Java (this includes four out of six of Indonesia’s veterinary schools) and so their programs of study are suited to the Javanese economy. This means that future Indonesian veterinarians, while in university, mainly study cows, chickens, pigs, and other farm animals.

Dr Prima, however, was most drawn to wild animals from early on. Despite having only seen orangutans on television, he found them to be quite captivating. What it was exactly that captured Dr Prima’s interest, he cannot put into words, but he does say that: “I just like orangutans!”

After finishing his basic veterinarian training, Dr Prima decided to come to Kalimantan to volunteer for one month at the OCCQ. Here, he followed the veterinarians around and tried to learn as much as possible from them. “If you want to learn about wild animals in Indonesia, you cannot do it at a university. The only way to do it is to come to a place like the OCCQ and learn from the doctors who come before you,” Dr Prima reflects. Encouraged by the local vet at the time to continue his studies and to become a full doctor in veterinary care, Dr Prima returned to Java to study chickens. Although this might seem funny, strange, or absurd to many western minds, Dr Prima’s reason for studying chickens is as simple as it gets: “It’s cheap! I couldn’t afford anything else…” When Dr Prima returned to the OCCQ in 2004, after two years amongst chickens, he started working as a veterinarian for OFI. Not having any experience with orangutans except for his previous month-long visit, he spent the majority of his time following around the more experienced doctors. Dr Prima learned quickly, however, and he and Dr Popo are now the main people responsible for the health of the orangutan orphans. Together they collect feces, blood, and skin samples whenever necessary, treat diseases like malaria and the flu, and perform operations on fractures and wounds. Dr Prima tells me about many different diseases that he has encountered and how he successfully treated each one, but also about how it is sometimes difficult to test and diagnose an orangutan.

Why this is difficult becomes clear when Dr Prima talks about “Hocky”. This friendly orangutan has been paralyzed on her right side since she was very young and she is currently having daily seizures. When these happen, Hocky experiences severe cramps and her eyes roll back into her head. It is a stressful sight for everyone but also difficult for Dr Prima. Unfortunately, he cannot tell from these symptoms what exactly is wrong with this sweet but disabled orangutan. In order to get a better picture of Hocky’s situation, Dr Prima needs to conduct more intricate tests and perform brain scans. The equipment for this, however, is not available in Kalimantan. Thus, it is extremely difficult for our doctors to organize an appropriate and effective treatment plan.

Another example of a lack of access to necessary equipment is the blood sampling machine at the OCCQ. Donated by a foreign foundation and bought in Australia, this machine is mainly suitable for the processing of farm animal blood. Because orangutan blood is very different from that of cows and chickens, Dr Prima has found that the blood samples do not turn out properly when processed by this machine. He therefore sends orangutan blood samples to the local hospital, where the samples are put through the same machine used to process human blood samples. Dr Prima tells me that most orangutan x-rays and surgeries are performed by the local “human” doctors and specialists rather than by veterinarians like himself. This really goes to show just how similar we are to our red primate cousins. Just 31 years old, Dr Prima was very young when he left the busy city of Surabaya in Java for the quiet village of Pasir Panjang in Borneo. Initially, he often missed his hometown. But now that he is married and has a son, Pasir Panjang has become his new home. For six years, Dr Prima has been caring for the orangutan orphans in our Care Center and as he is still young, he will hopefully continue to do so for a long, long time.

Orangutan of the month May 2020
POPPY, Strong and Independent