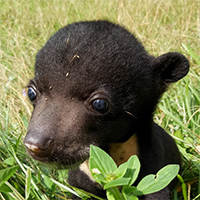 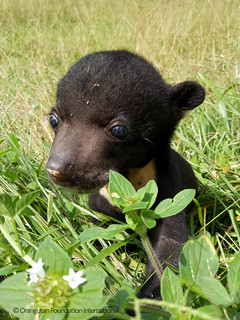 With the vanishing rainforest, the grim reality facing us today is that more and more wildlife is displaced and coming into conflict with humans, usually resulting in the animal’s harm or death. Such circumstances led to one young bear’s arrival at the Orangutan Care Center in Pasir Panjang in Central Indonesian Borneo. Merely weeks old, she was found abandoned and alone. This tiny bear was affectionately given the name “Bubu”.

Little is known about sun bear reproduction and rearing in the wild, due to the elusive nature of the bears. There seems to be no particular mating season, but after a gestation period of 3-8 months, a cub is born, usually in a nest the mother has made in a tree hole. Cubs are born blind, hairless, and completely dependent on their mothers for survival. A sun bear mother fiercely guards her cubs, and would not abandon them unless she herself were killed. While orangutans spend up to 10 years of their lives closely attached to their mothers, sun bears spend a much shorter period, from 18 months to 2 years. This means the rehabilitation window is narrower as well. 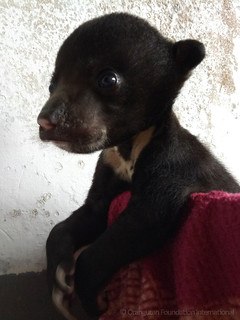 Hand rearing a young cub is no easy task. Cubs normally receive nutrient rich fatty milk from their mothers, so the OFI staff must provide the next best thing with milk by the bottle. Cubs typically need about 20% of their bodyweight in food per day. As such, Bubu needs round the clock care to help her through these first critical months. Fortunately, the caring staff at OFI are willing to work through the day and night to help raise this little cub, be it 12 in the afternoon or 3 in the morning. She loves her milk, while being selective as to which caregivers can give it to her. This is good, as her human contact will gradually become limited as she is prepared to return to the wild. Bubu knows how to make a good mess, and sometimes splashes the milk all over face! Bears as a rule are governed by their stomachs, and this rule certainly applies to Bubu. She loves to eat, particularly papaya fruit, eating every last bite including the skin.

Early on, Bubu was kept as comfortable as possible in her own basket filled with blankets to snuggle into. She experienced some stomach problems initially, unable to pass food. The OFI medical team helped her until she was able to do so on her own. In the wild, sun bear mothers teach their cubs everything they need to know in terms of surviving in the wild. Bubu had to learn everything for herself.

Bubu is growing fast, with an outgoing personality and a lust for life. Her distinctive chest patch now glows a fiery sunset orange, matching her radiant blue eyes. Beloved at the OFI Care Center, she receives all the care and affection she deserves. In the first couple of months, cubs learn to stand up straight and walk, initially shuffling backwards. To practice, Bubu was given her own little grass “playground.” Easily startled by loud noises, Bubu will instantly react defensively. This is cute but also imperative to her survival in the wild. 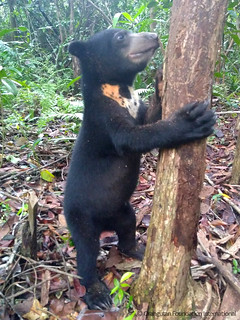 Like the orangutans in OFI’s care, Bubu goes on daily forest excursions. She can happily entertain herself in the forest. Showing all the impetuousness of youth, she hops into muddy puddles with glee. Whenever Bubu is happy, her nose crinkles up, and she opens her mouth in delight. She loves to explore and follow her nose. Her favorite spots contain several slowly rotting felled trees which she practices biting through with her already strong teeth. Beginning to forage as well, she uses her nose and long tongue to track down ants and larvae. Sun bears can stick their tongues out up to 10 inches while feeding! The longer the tongue, the more food they can get. In the wild, sun bears benefit the forest ecosystem by controlling termite populations. Once she has found an insect nest, Bubu straddles the tree, and picks off the insects one by one. She sometimes lets them crawl onto her paw, and then licks them off. Other times, she gets in over her head, sticking her face into a tree and coming out with ants swarming all over her. She will frantically roll around on the floor, pawing away to get the ants off!

Initially housed on her own, Bubu was eventually integrated with another cub, Shannon. This took some getting used to. Initially Bubu refused to acknowledge Shannon, acting out defensively when approached. Shannon, who had spent time with other bears, was undeterred. After some time, Bubu warmed up to Shannon, and they now play-chase each other on their daily outings, darting in and out of the ferns trying to catch each another. The pair sometimes become so excited they can hardly contain themselves. Facing each other, they stand up on their hind legs and shake their whole bodies while stretching out both paws like jazz hands. Bubu will fall on her back, writhing around on the ground with delight while Shannon pounces on top of her.

Through observing Shannon, Bubu has become an adventurous tree climber. This skill is good for multiple reasons: she can scale trees to escape predators, or she can do it just for fun! She shows no fear scaling the tallest trees. She has cleverly figured out how to relax while high up in the trees by resting on a steady branch and tugging on weaker branches to paw and chew at leaves to her heart’s content. When she is ready to come down, she uses her long claws to slow her descent before dropping down the last bit. It is not a particularly graceful move, but Bubu is too busy enjoying herself to care. Bubu enjoys her time in the forest so much that she doesn’t want it to end, but knowing she can come back again tomorrow, she will bound after her caregivers when they are ready to return to the enclosure.

Rehabilitation is an intensive process, and at times feels desperate, due to the dire situation for wildlife in Borneo. OFI will continue in earnest to prepare Bubu for a future of freedom. The forest is both a beautiful and dangerous place for a young bear, but as Bubu continues to grow and thrive, she will find her place.

Employee of the Month: Ibu Ipuk