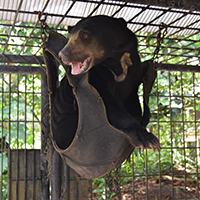 Komet always has a constant look of happiness on his golden muzzled face. He has grown into a good size; he is easy to pick out by his horseshoe shaped white chest patch. He is always alert and if any humans approach the enclosure he rushes along to greet them, to smell them, and to see if he can get any food from them although Komet isn’t as motivated by food as some of his peers.

Arriving at the Orangutan Care Center and Quarantine (OCCQ) a few years ago Komet was already quite a tame character. With the government cracking down on orangutans being kept as pets, there has been an increase in sun bears in the pet trade instead. Cubs are cute but they get bigger and are not designed for domestication. In the case of Komet, he was actually found as a very small cub and kept by a well-meaning individual, Pak Usman. For the first part of his life he was only exposed to humans. In fact, for one and a half years Komet was bachelor Pak Usman’s “son” and slept with him every night. Komet was confiscated from Pak Usman. But Pak Usman cared so much for Komet and bears in general that Dr. Galdikas asked him to work with the bears at the OCCQ. Pak Usman initially refused. He eventually came around and began working with OFI, but that is a story for another time. Now though it was time for Komet to learn how to be a bear.

Komet couldn’t have started off better when he met Ori, his soon to be long time best bear friend. Ori and Komet are as thick as thieves. They were introduced when young and have become inseparable ever since. They do everything together – sleep, eat and play. Komet looks up to Ori and will follow him around and copy what he does. When the pair were first introduced into their forest enclosure they set about the trees in their own destructive way. There are some disagreements like in all friendships. This is usually over food, specifically honey. It has to be ensured they are both given honey at the same time and the same amount otherwise it can cause a little… discussion. There are no grudges. Once the matter is solved in the heat of the moment they move on. Only minutes later, they begin playing with each other.

Watching Komet and Ori play fight is a wonderful thing. They both stand up on their strong hind legs face to face, looking like a pair of prize fighters about to land knockout blows. Spreading their arms wide, they will grab each other and dig their strong jaws into each other’s fur, vigorously shaking their heads.  They will happily fall about and jump on each other’s backs for seemingly hours on end. It may look rough but sun bear skin is naturally loose. In actual attacks if a predator bites them, sun bears can twist around in their skins to fight back. Komet and Ori’s play helps them to work on these skills, skills that we hope shouldn’t be needed as they become fully adult

Komet loves his fruit, but like any respectable sun bear he will tear into a log to look for ants. However, when it comes to coconuts Komet has a unique way of opening them. He is able to take the outer shell off easily enough but once he has gotten through to the hard hairy shell beneath he has a bit more work to do. His technique to crack the coconut open is to grab the coconut within his paws and raise it up to his right or left shoulder before throwing it down onto the ground. He will even climb up onto the platform to try and toss it from a height, smashing it down again. He will repeat this over and over until he eventually cracks it.

Komet loves visitors and will always want to be in on what is happening. He also has his own version of helping out during cleaning sessions. When the communal enclosure is being hosed down, he will invariably run around in front of it and use the opportunity for a shower. Cleaning can sometimes take a little while when is he around.

When taking account of the bears in their enclosure we have to remember that as well as looking at the ground we have to look to the sky as well. Komet has one particular tree he is very fond of scaling which he then uses to rest in. He uses his long, curved claws to make short work of climbing to the canopy where he enjoys having his vantage point so he can survey his” territory”. Wild sun bears actually spend the majority of their time in trees.

When there is less human activity around, sun bears will spend more time on the ground. The nests they create up in the trees can also be recycled by other animals which is one of the many benefits sun bears provide to the Bornean ecosystem.

The enclosure has more to offer besides the trees. Komet likes to hop inside one of the tire hammocks in the enclosure provided by the OFI enrichment team. He will sit there for many minutes and sway back and forth. Other times he may have chased Ori into the tire hammock and the two will start wrestling, one pinned in the hammock while the other pushes down on him.

Komet has a natural spark that burns brightly, making the best of each day at the OCCQ. This enthusiasm is contagious and if you’re having a bad day, you can do worse than pay Komet a visit to cheer up your spirits.

Otok – Orangutan of the Month

A New Home for Gulu Gulu

Orangutan of the Month: Lear