OFI’s most recently established orangutan release sites are both located in forest to the east of Tanjung Puting National Park in the Seruyan Regency.

Camp Kerantungan, or Camp Hanau as it is often called, is located in Hanau district. This camp was originally one of the series of patrol posts that OFI built around and within Tanjung Puting National Park. The post was identified as a choice release location for proximity to a large corridor of forest that ultimately connects to the forests of the National Park. In 2008 the post was expanded to support more full time staff as well as accommodate further supplies needed to feed both staff and the new incoming orangutans.

Since 2008 OFI has released over twenty orangutans at Camp Kerantungan, some of which still come to the feeding station and many others who have made their way back into the forest. Several released females have made the forest near camp home and have settled down to raise offspring. Daily feedings are offered which allow OFI staff to monitor the health and wellbeing of all the orangutans who pass through. Both wild male and female orangutans have been seen near Camp Kerantungan. They even come to feedings during low fruit season in the forests nearby. 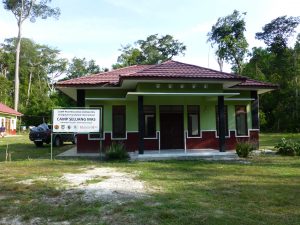 Camp Seluang Mas is OFI’s newest orangutan release site. It was built in 2012 with support from OFI’s Indonesian partners. Built five kilometers southeast of Camp Kerantungan, Camp Seluang Mas is also on the edge of the Seruyan forest, a peatswamp forest that stretches south along the eastern border of the National Park.

The first six orangutans were released at Camp Seluang Mas as part of OFI’s “Friends of the Orangutan” program. Among those present was the Seruyan Regent and the Minister of Forestry for the Republic of Indonesia who has been very supportive of OFI’s programs.

In total 32 ex-captive orangutans as well as two translocated wild orangutans have been released into the forest surrounding Camp Seluang Mas. (Other translocated wild orangutans have been re-located into other forests). Comprising mostly of adolescent and sub-adult males and females, the wild born ex-captive orangutans from the Care Center at Seluang Mas now make up a generally friendly community around the camp. Several of the sub-adult males have ventured far into the forest as is natural for this nomadic stage of their lives. However, OFI’s camp staff are still monitoring most of the newly released orangutans. They all forage for wild foods, construct night nests in the canopy, and display normal social behavior. As benefits their adolescent and subadult status, the released orangutans are relatively gregarious. Camp Seluang Mas orangutans have access to daily feedings. This helps allow OFI staff to keep track of orangutan health and activity in the area. One subadult male, one of our first releases, returned to Seluang Mas after a two year absence, looking magnificent from his years in the forest.

Photos of the current release sites

Camp Kerantungan and Camp Seluang Mas still serve as patrol posts and bases for OFI staff to conduct outreach to local communities and plantation workers who may encounter either wild or released ex-captive orangutans. Good natured communication with people to the east of the release forests has been a major factor in OFI’s successful rescue and release programs in the area. Constant threats to the forest in the area include encroachment by local farmers and palm oil companies, forest fires, and illegal logging.  Our camps are a constant reminder of OFI’s presence in the area. This helps prevent potential threats to the forest.

Approximately once every two weeks OFI brings in supplies including two pickup trucks full of fruit and vegetables for the daily orangutan feedings.

Read about our historical release sites