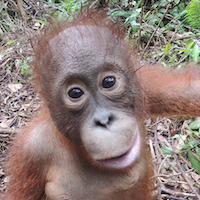 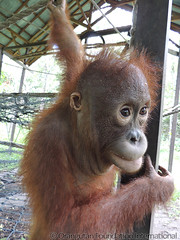 Infant orangutan Valentino arrived at OFI’s Orangutan Care Center and Quarantine (OCCQ) on the day that gave him his name: February 14th, Valentine’s Day. Like most of the orangutans arriving at the Care Center, his backstory is a blur. But we do know that a man found the timid and helpless orphaned Valentino in a remote village where he was visiting and took Valentino into his care. When he returned to Pangkalan Bun, he turned Valentino over to the OCCQ. This man’s act of love, on the day of love, kick-started Valentino’s transformation into a healthy, increasingly self-reliant orangutan. But this act of love came from a dream. As he handed over infant “Valentino” to Dr. Galdikas, he told her that he was motivated to help orangutans because of a dream he had recently.

Valentino was one of the first orangutans I met at the OCCQ. He immediately stood out with his tiny frame, big eyes, and formidable potbelly. His adorable appearance meant that, like most orangutan infants, he essentially captured the heart of everyone he met. But Valentino is more than an endearing face underpinned by a very sweet nature. There is also a fierceness to him that garners the respect of humans and orangutans alike. 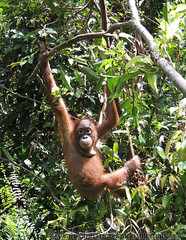 Valentino may be small, but he has spirit! If he feels that his wants are not being adequately met by his caregivers, he will promptly alert them to this fact. While the other orangutans sharing Valentino’s sleeping enclosure are busy playing or making nests out of branches and leaves, Valentino counts down the minutes until his afternoon snack and, should he perceive that his caregivers are running a bit late, he emits a high-pitched shriek. He wants his snack and he wants it now!

Valentino takes full advantage of daily forest releases with the other infant orangutans. The moment his caregivers set him down at the nursery playground, Valentino dives into the forest! Unlike some of his infant peers, Valentino much prefers climbing in the trees to being coddled by caregivers or splashing in the puddles that form after heavy rains. His movements in the forest are energetic yet steady. He likes to climb much higher than other infants his age – so high that oftentimes you can only catch glimpses of his bright orange hair glowing in the sun as he swings from branch to branch. When he deigns to come down into the lower canopy, Valentino tests his weight by hanging precariously from the flimsy ends of branches, a habit which occasionally sends him crashing to the forest floor, then bouncing back up, uninjured! When not testing his limits and learning the risks involved in an arboreal lifestyle, Valentino can be found foraging for “kosa” grass and “kalaki” leaves close to the ground, turning somersaults on the forest floor, or wrestling with his best friends Melly and Kino. 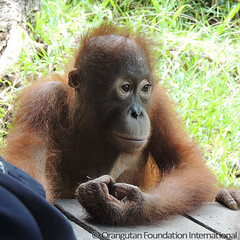 One afternoon as the infant orangutans were being escorted back after a long day in the forest, I realized that Valentino was breathing heavier than the others. Worried that he might be sick or injured, I immediately alerted his caregivers. With only a little time for the orangutans to settle down in their sleeping enclosures, I was reassured that Valentino had simply played so vigorously in the forest that he had tired himself to the point of exhaustion! Valentino is keen to keep up with the older, larger orangutans, but with a very round torso and short arms and legs, his infant size and proportions are not yet developed enough to allow the same sort of easy, quick movement through the trees that the older orangutans enjoy. Thus, little Valentino is forced to put in extra effort to keep up with his older friends, or else drop his autonomous pretense and return to his caregivers’ arms for a restorative nap, which does happen on occasion. Still only a few years old, Valentino might be able to hold his own with his older peers, but still needs the reassurance of his caregivers like he would with his mother in the wild.

Prior to becoming an orphan little Valentino would have shared a nest each night in the forest with his mother. Still craving the safety he would have felt from his mother, Valentino has found an unlikely new nighttime companion. While Valentino is the smallest orangutan in his sleeping enclosure, friend Walman is the oldest and largest. Most nights these two can be found cuddled up next to each other in a sleeping nest. Made from the branches provided each evening by staff, Valentino and Milo sleep with an arm around each other, helping the other feel safe and warm. 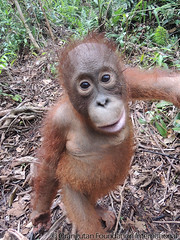 Valentino is a sweet and social orangutan, yet he knows what he wants and isn’t afraid to ask for it. With time Valentino will learn more about the forest, start constructing his own sleeping nests, and hone his climbing skills. For now his dedicated caregivers are looking after him while Valentino is content to play with the “big kids” and explore OCCQ’s nursery forest. So here’s to the orangutan who shot me with an arrow from Cupid’s bow and continues to charm the socks off me this February: Valentino!

Orangutan of the Month: Lia