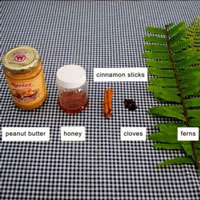 OFI is first and foremost committed to the conservation of orangutans and their rainforest habitat, but as more and more logging destroys the diverse jungles of Borneo, other species are in increasing danger of disappearing. This has put huge pressure on OFI to help other animals in need of shelter. Two sun bears, a disabled adult female, Denny, and a juvenile male called Kevin are now being fed and cared for by the Orangutan Care Center staff. Since the omnivorous sun bears have different dietary and enrichment needs to the orangutans, the enrichment team has been researching alternative ways to stimulate the bears whilst they remain in captivity until their eventual release.

The enrichment team must ensure that the two bears develop their foraging skills; they cannot be successfully released into the wild until they are self-sufficient for food. Denny and Kevin have been deprived of their natural habitat from an early age; Kevin was discovered near a palm oil plantation in Bumi Langeng and was sold as a pet to a family who kept him in their house, tied up with a chain. He was fed a diet of milk and rice but as he grew larger, the villagers began to fear this new community member and the family decided to hand him over to OFI. Denny also lived in captivity at the Pangkalan Bun Zoo under very poor conditions until OFI bought the Zoo and closed it down.

Many objects of possible interest for the bears have been provided by the enrichment team, including: daily water basins in which they can bathe, ice and honey, fruits filled with cloves, branches as well as burlap rolls filled with ferns doused in honey, peanut butter, cloves and cinnamon sticks. For protein they receive eggs and termites. They also receive burlap sacks filled with leaves and decaying wood so that they can practice foraging as they would in the wild. Hammocks will be eventually be constructed for the bears so that they can sleep above ground.

Learning about their dietary needs was imperative; documented observations report that sun bears enjoy eating termites, honey from bee nests, earthworms, small birds, lizards, small rodents, fruits (figs in particular) and the hearts of coconut palms. Sun bears have poor eyesight, and use their keen sense of smell in order to detect food. Their strong jaws are used to crack nuts and their long claws can open up fallen or decaying logs to extract termites and grubs. Thus, the enrichment team needs to ensure that the food provided allows the bears to continue exercising their claws, jaws, and noses!

It is a joy to watch Denny and Kevin eat since they often formulate strategies to maximize the amount of food they can extract. When they open coconuts, they first rip off the hard green outer-shell. Once this is removed they proceed to lie on their backs and claw a hole into the main, woody shell until it finally cracks and the tasty juice flows out; they then position the hole over their mouths and lick the inside of the nut with their exceptionally long tongues. Using this strategy they are able to drink as much of the juice as possible.

For other items, such as the burlap donuts, the two sun bears employ different strategies. Denny reclines on her back and meticulously bites off the string, slowly unraveling the sacking until all the ferns fall on her tummy; she then carefully licks off every morsel. Kevin is more vigorous in his approach and pulls at the sacking, ripping and tearing it apart until he manages to pull out the leaves; once he succeeds he enthusiastically attacks them with his tongue.

These activities ensure that the sun bears are continually exercising their species-specific behavior as they would in the wild. However, since there are over 330 orangutans in the Care Center which also have similar expectations from the enrichment team, finding time to research new ideas for the sun bears and enact them is becoming difficult. OFI is currently expecting a specialized intern who will be providing more intensive enrichment for the sun bears, tailored for their specific needs. Eventually, when Denny and Kevin are ready, the interns will be responsible for organizing their rehabilitation for their eventual release to the forests. Interested applicants can read more at http://www.orangutan.org/how-to-help/volunteer/long-term-volunteering. Orangutan of the Month for April 2017: Karti