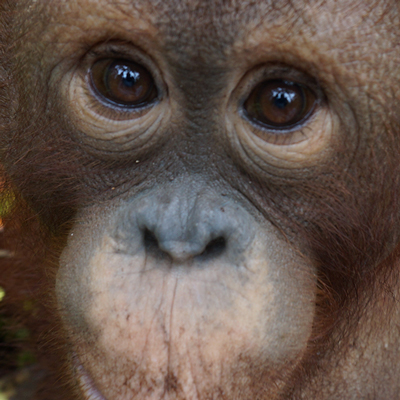 The mid-day sun hung heavy in the sky. Even the shade offered no respite, for the powerful equatorial heat can reach even the darkest corners of the forest. 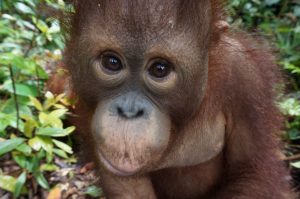 My sweat-soaked clothes clung tightly to my body, a daily discomfort I’d grown accustomed to over the last six months. Kneeling by a shallow creek, I stared with squinting eyes at the tangled canopy above me. Somewhere in that dense foliage were two juvenile orangutans surprisingly well-camouflaged against the brown and green web of vines and branches. Turning my head from left to right, I tried to dodge the beams of sunlight that penetrated the tree tops. Sunglasses, of course, were out of the question, as were hats, jewelry, water bottles, and any other dangly item that might catch the eye and interest of a young orangutan. Instead I was without aid, craning my neck to spot two wily little red-heads. A cloud moved across the sun, and in that moment of reprieve I saw them! Like children exploring the playground, Robert and Satria swung quietly between the arching tree limbs within the OFI (Orangutan Foundation International) Enrichment forest. Though we had walked to this spot together, I knew the orangutans had already forgotten my presence. Slowly, but without any caution, they moved through teetering tree tops fearlessly. From below, I stood still, mesmerized by their festivity. 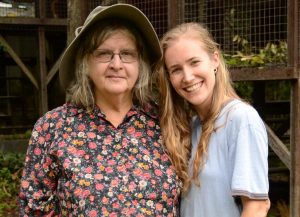 These are the wild-born ex-captive orphan orangutans of OFI’s Care Center and Quarantine (established many years ago by Dr. Biruté Mary Galdikas). They are just two of hundreds of rescued orphans whose mothers had been killed before their offspring’s eyes. Many have been pets, ripped from their mother’s chest and placed in cages and cardboard boxes. Some had been clothed in baby outfits. They are refugees in a world of environmental extermination. Their homes are vanishing at the fastest rate of deforestation in the world. And yet, every day I spent working as a long-term volunteer at the Orangutan Care Center, I was repeatedly surprised at their capacity for joy. I was continuously amazed at their ability to persevere even the worst traumas. They had seen abuse and experienced loss I couldn’t even begin to imagine, but when they swung between the trees on their forest releases, they were happy.

That particular day, as I stood watching Robert and Satria explore the forest, was actually my last day as the Communications Volunteer at the Orangutan Care Center and Quarantine. After almost seven months in Indonesia, I could hardly believe I was packing my bags for the long journey home.

For many, many years, visiting Borneo was my greatest dream. I was first captivated by the majesty of orangutans when I started an internship at a local sanctuary. It was day one when I locked eyes with a hulking, cheek-padded male who began to “display” as I approached his habitat. He grabbed onto the ropes that dangled from the roof of his enclosure and swung himself strongly from side to side, his flame-red hair swaying with his movements. I had never seen anything like it before. I imagined how he might look in the wild, the largest arboreal animal on the planet, and was amazed that an animal so fantastical could actually exist in this world. In time, I fell in love with the orangutans’ demeanor. Their size was made all the more fascinating when I discovered how quietly they moved and how thoughtfully they observed their surroundings. 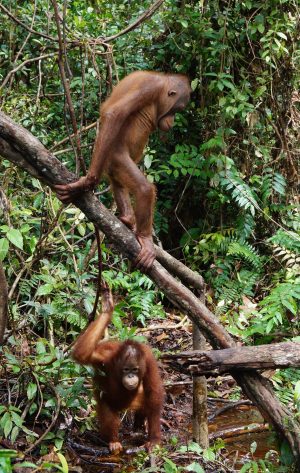 During this time, I searched feverishly online for information about these incredible beings. I learned that they lived in only two places on earth, Borneo and Sumatra. If I wanted to see orangutans in the wild, I’d have to go there. When I learned of Dr. Galdikas and OFI’s long-term volunteering placements, I knew I had found my match. For many years, while I finished school and worked other animal jobs, there was no greater dream of mine than to go to Borneo and offer any help I could to the orangutans. Last year, that dream was made reality.
As much as I want to, I can’t begin to adequately condense my six month volunteer tenure into a brief, digestible blog. I am tongue-tied when I try to retell all the little moments I had the privilege of sharing with so many orangutans. I don’t yet know how to explain the imprint their friendships have made on my soul. What I can tell you is this:
As humans, we often search the stars and the heavens wondering if there might other beings somewhere in the universe that are like us. In fact, there are. Better yet? They’re already here, on this planet. Orangutans are the other human life forms we’ve been searching for.

They are dynamic individuals. They make decisions, change their minds, like some things and dislike other things, grow and learn as they get older. Sometimes they squabble and bicker. They also comfort each other. Adults will groom their friends; the young ones will hold each other and often fall asleep in a locked embrace. They are peaceable beings, overwhelmingly gentle and quiet.
As the Communications Volunteer it was my job to get to know the different individuals of the Care Center, take their photographs, and share their stories with the world. I hoped to do them justice. I hoped to illustrate how different they all were: How little Berman loved to have her hair combed through, how Stanley relished a belly rub, or how much fun Mitchell had playing with a burlap bag. There are so many of them, all with their own quirks and stories. 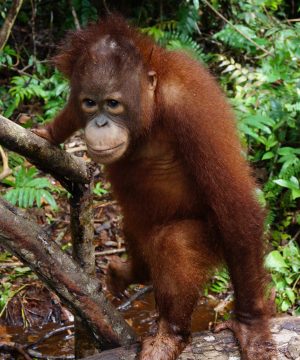 After living in Central Borneo in the company of hundreds of these orphans, the prospect of returning home to Florida seemed staggering. I wondered if I would remember my experience or if it would, like most things, fade in time into a dream-like memory. Would I remember the way their hands felt? Would I remember the way they sounded when they laughed? Or how they looked when they stared into the tree tops, their eyes reflecting a cloudy sky? It turns out, those moments did not fade. Rather they sit with me every day, as I know that my tenure may be over but their journey is not. They are still there, at the Care Center, preparing for their eventual release back to the forest. Since my departure, some of them have already made that trip. I think of them and imagine them rediscovering their inner-wild-orangutan. I wish them the best of luck but really, I know they need more than luck.

OFI with the help of donors, staff and volunteers is working to secure a future for Robert, Satria, and the hundreds of other orangutans that deserve their chance at freedom. If you have the resources, please consider making a donation to OFI to help us make this dream a reality. Additionally, if you have the time, consider applying to volunteer. It proved to be nothing short than the greatest adventure of my life.