By Guest | In Orangutan of the Month, Stories | 1 Comment 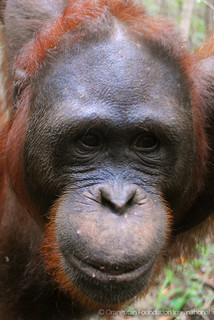 For orangutan infant orphan “Voyce”, OFI’s Care Center and Quarantine (OCCQ) in Central Borneo was a light that brightened his once uncertain future. Voyce had developed a serious parasitic worm infection that caused gastrointestinal distention. He had a large, visible swelling of the abdomen. While some parasites develop and live within their host unnoticed, the parasites affecting Voyce were profoundly detrimental to his health. With natural growth inhibited from his heavy parasite load, Voyce had become thin, lacked appetite, and had scarce amounts of hair on his body.

Infant Voyce’s health situation began to turn around upon his introduction to the OCCQ. Dr Prima and veterinary staff provided the expertise and care that orphan Voyce desperately needed. Voyce was put on a local diet consisting heavily of guava leaves, a natural forest ingredient which served as a powerful antiparasitic medicine as well as providing roughage, aiding in his recovery.

Voyce’s bounce back to health was transformative. Today, it is impossible to discern the battle his then skinny, little infant body had fought some years earlier. Voyce has grown steadily and is now even slightly larger than many of his peers. His facial features are striking and remarkably symmetrical, with eyes slightly recessed in his narrow, oval face. In the sun Voyce’s now plentiful hair catches the light and the colors are breathtaking. A spectrum of tones from dark brown to almost-purple crimson shades of red are overlaid with flickers of bright orange. Voyce also has a marking unique to himself: a dark patch on his lower back so black that it looks as though it had been painted on with a large paintbrush. When Voyce is high up in the forest canopy with his face not visible, this mark serves as a useful indicator for caregivers to track his location as he moves from tree to tree.

Voyce’s energetic pace through the forest slows down for two main occasions: when he pinpoints a termite nest and when he wants to play with peers. During forest school, OFI staff help the orangutans locate termites by prodding the ground with long, sharpened sticks. Around the roots of trees, this poking may deliver a muted, hollow sound from the ground. But, at the sound of “tap tap,” the stick has hit on a source of tasty termite treasure! 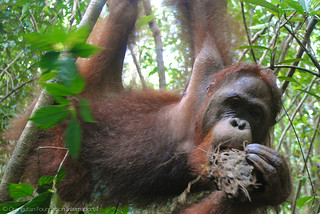 Voyce enjoys playing with his peers, and does not shy away from rough interactions. He frequently bursts over to one of his friends to tackle him down, so that they both end up lying tangled together on the forest floor. One of Voyce’s best friends is Golong. Mouths open, pushing each other time and time again amongst flying leaves, the two create quite a scene for the younger orangutans to watch from up above in the trees. The most interesting part of their rough play is how it finishes. Out of nowhere, the biting and challenging abruptly cease. The two look at each other and, as if sharing a mutual understanding, they move apart to continue exploring the forest, as if the last few minutes of wrestling and rough housing had not occurred!

Though Voyce spends much of forest school engaged in rough and raucous play, he also has a gentle and tenderly inquisitive side. In his interactions with staff at Pondok Padang Satu, Voyce is careful with a light touch. In forming an understanding of people, he often uses smell, coming in close to a caregiver’s face as if to breathe it in. The juxtaposition of his powerful, muscular juvenile’s body with his soft, gentle interactions is one of the characteristics that makes Voyce so special.

Inquisitive Voyce also takes great interest in his own reflection. Approaching the OFI camera, he gazes at the reflection of his face in the dark screen. As he stands on all four limbs and looks intently at himself, the impact OFI has had in Voyce’s wellbeing and development into a strong and confident orangutan is clear. All who know him are so proud of his success, and OFI will continue supporting him until he is ready to return to a life of freedom in the forest. 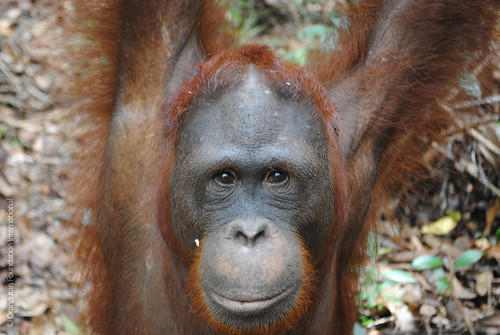