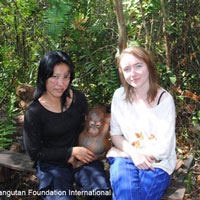 For me, nature and writing are intertwined. I believe strongly in conserving our natural environment; it inspires me to reflect and write about it. As the Communications Officer I will be responsible for collecting news within OFI’s Orangutan Care Center and writing it up for the website. Luckily, collecting the news is a hands-on job and I will be working with the other care-givers and the orangutans in order to relay the information straight from the forest floor! Each morning I set off with my camera and notepad and help out where and when I can, seeking out the next inspiring tale.

But I am getting ahead of myself. Let me tell you a little about how I got here, first…
A year and a half ago a collection of my poetry was published and I have worked on various environmental campaigns in the UK and India. I was all set for a route in the conservation of wetlands in the UK. Yet after studying palm oil plantations and the destruction of the rainforest in Indonesia, I felt a sense of frustration, and these feelings strangely, wouldn’t go away.

I was impressed that OFI had taken direct conservation action by buying forest land for species conservation and I immediately knew that I wanted to support this organization. After several interviews I was granted the role of communications officer to follow the previous intern, Rowan. I needed to move quickly in order to reach Pangkalan Bun to overlap with Rowan by a couple of days and learn more about the volunteer position. Yet things didn’t go exactly according to plan…

Plans Spiral Out of Control in Jakarta

My planned overnight stay in Jakarta on the island of Java grew and lengthened as my initial plans to reach Borneo were punctuated by problem after problem. Cancelled flights, broken planes, travel agencies booking me tickets to closed airports; the list expanded and expanded. I found it baffling that a travel agent would sell me a ticket to a closed airport; I was even more amazed when she would not give me a refund when this was pointed out! It was like venturing into another world. I truly had fallen down the rabbit hole!

Finally, I managed to secure a ticket to Pangkalan Bun with fellow volunteer and botanist Stephanie. The multiple delays meant that I wouldn’t meet Rowan after all. Yet, as chance would have it, at the airport Rowan sent me a text message saying he was still on the plane and just about to disembark in the Jakarta airport! I might still catch him! I waited by the window and saw him as he left the plane. At least we had caught up with each other, if only for twenty minutes or so, but it satisfied me that all my urgent preparations to meet him before he left had been worth it.

My first day in the Orangutan Care Centre will stay with me forever. I had never before encountered such graceful, intelligent creatures as orangutans. I can only describe the experience as playing with orange children who seemed completely silent and often expressionless! Only the very little baby Heather cried whenever her favorite care-giver ventured with other orangutans deeper into the forest. I was surprised that such small creatures seemed to have such strong, different personalities.

Other things at the Care Center made a deep impression on me. When things run out, it involves a trek to the nearest town which is not necessarily stocked up on anything. I learned this lesson when I encountered one of the care-givers at the Care Center who had covered her entire face in bright red lipstick. When I politely inquired why she had covered her face in lipstick, she explained that she had run out of face-wash for her acne and had to make do with what she had! I loved her sense of humor, and I love the way local people here seem to laugh over the smallest things. It is infectious.

Along with experiencing overwhelming first impressions, I learned much useful and interesting information which will serve me well in the coming months. After spending some time with the enrichment officers I learned more about the Center: how even gibbons and sun bears are rescued by the organization. I thought that this was fantastic news. Perhaps over the next six months I will write about the species other than orangutans being looked after by OFI. On my first day I was asked to take one of the disabled orangutans into the forest for a daily walk! By the end of the day I was full of ideas and very much excited to act as the communication channel for OFI’s conservation work at the Care Center forest.