I have only been active three months as an enrichment volunteer at Orangutan Foundation International’s (OFI) Orangutan Care Center and Quarantine (OCCQ) in Central Indonesian Borneo (Kalimantan Tengah) and my experience so far could hardly have been more enriching! This is true not only because I have learned much about Indonesian culture, language, food, and customs but also because I have been able to spend time with more than 300 orangutans.

Learning about Indonesia first-hand has been an incredible experience for me. Aside from Mexico, the land of my birth, and the United States, I had never before visited any other country. 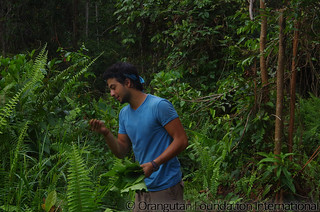 Before coming to the OCCQ in Borneo, I had worked as a volunteer at the Mexico City Zoo. I had expected each of the hundreds of different species housed there to react very differently to me. Before I came to Borneo, despite how obvious it may seem, I had never imagined the diversity of personalities that I would find in just one species, the Bornean orangutan. One of the reasons why I was initially interested in animal enrichment was because it gave me an opportunity to closely observe animal behavior, to know individual personalities, and to get a good idea of what various animals are like. Ultimately, with luck and perseverance, I wanted to establish a connection with them. Many people believe that connections established with animals when they are given enrichment are merely due to, or a reflection of, a positive stimulus. I did not believe that before I came to Borneo and now, I am convinced that people who hold that view are wrong.

Every day I give enrichment to different orangutans at the Care Center. I am astonished at the differences I observe among the various orangutan individuals. And to think that, at some point, we once thought that humans were the only animals with personalities! Every time I sit down to observe how each of the orangutans reacts to the enrichment, I witness the variety of responses that are the result of different individual life histories, personalities, and skills.

Some of the enrichment that I give the orangutans consists of “parcels” of native foliage, such as edible ferns or tree twigs and leaves, wrapped in a small locally woven mat made up of rottans or reeds, tied together with a vine. The inside of the parcel contains varieties of edibles, such as vitamin gummies, honey, oatmeal porridge, popcorn, peanuts, small native fruits or berries collected from the wild etc., in small quantities. The local enrichment officer and I spend hours putting together these parcels. We try to make them as appealing to the orangutans as we can. 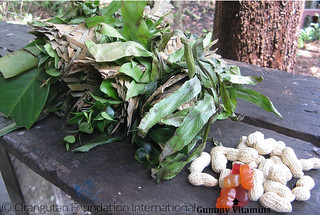 Some of the orangutans will show curiosity, looking at the enrichment parcels from different angles before deciding to open them. Some use their hands to open the parcels. Others use their teeth, showing a pretty nifty ability to obtain food easily. Others display their creativity by using the different parts of the enrichment parcels as some kind of toys after consuming the food bits inside. Others simply look for the fastest way to get the food bits out, destroying the carefully rolled parcels without paying much attention to the constituent parts. Each orangutan seemingly has his/her own way of being so we can not expect them to all act in the same way or to like the same things, including food. This is what makes being part of the OCCQ team so challenging, delightful, and, for me, enriching.

Another funny and charming thing about orangutans is that, after I give them enrichment parcels and sit down to observe them, I often end up being the one observed. I sit there trying to guess what they are thinking but when I look at them closely, it seems that they are asking themselves the exact same question. I think that this curiosity and awareness is the reason why I have always felt a connection with orangutans. Now it is the reason why I wake up every day trying to imagine new kinds of enrichment, attempting to challenge the curiosity and intelligence of this wonderful, enchanting species, the orangutan.