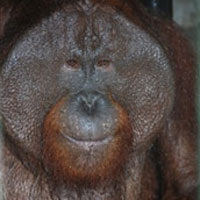 Boy Finds His Own Enrichment

It was a quiet rainy Sunday at the OCCQ, too quiet apparently for one of the residents. Boy, a fully-grown, adult male orangutan gave all the appearance of spending his Sunday afternoon lazily building a nest out of fresh acacia branches in his night house.

We soon realized that Boy had very different plans for his afternoon than we had anticipated. Boy had carefully stripped all the leaves from several long branches by twining the branches in between the bars of his night house and then quickly pulling them out, effectively tearing all the leaves off in one motion. With one of the long branches in hand, Boy climbed the platform in the center of his enclosure and then continued ascending until he was perched on the side of his night house, hanging from the bars that form the top of the enclosure. It took only a second to push the long stick through the bars and his work was complete.

We all looked up in surprise as the first roof panel came falling down with a crash! Boy had pushed one of the roof shingles off balance and it had fallen through the newly created hole to land on the top of his enclosure. As we came running over, we saw Boy reaching through the bars to draw the large chunk of the remaining piece of roof through into his enclosure. He dropped the large stone piece to the marble floor where it smashed into several smaller chunks. We dashed forward, hoping to grab some of the sharp pieces before he could climb back down to the ground, but we had underestimated Boy. With lightning speed, he descended to the ground and stood glaring at us over his pile of stone pieces. To the victor go the spoils they say and Boy apparently agreed. Pulling the pieces just out of our reach, he sat down to grind the largest together like a small child playing with blocks. Although we were concerned about the possible health hazards these shingle pieces may present, we decided it was more important to confiscate the long branches from him so that he did not continue destroying the roof. Using a papaya as bait, we enticed him to the front of his night house so that we could remove the branches behind his back. Bartering with orangutans doesn’t always succeed but Boy cooperated fully. As he devoured the papaya in three large bites, we breathed a sigh of relief that we had been able to get all of the branches out of his reach. Boy was about to teach us another lesson in working with orangutan ingenuity.

About ten minutes later, the silence of the afternoon was shattered once again by a series of crashes, one after another. It was easy to find the source of the noise; several roof singles lay in pieces on the concrete next to Boy’s enclosure. Boy himself was again perched at the top of his night house, prodding the shingles with another long stick. But where on earth did the long stick come from? We had removed all of the branches that we had been able to find earlier and he did not have access to any additional tools. Boy was a step ahead of us. Sometime in the past, he had hidden a long branch in his night house, just waiting for the opportune moment to use it. The origin of the stick is still a mystery. Was it perhaps a long thick branch that he had mistakenly been given in the days leading up to the incident or was it perhaps once part of a cleaning tool that had been left too near to his enclosure? Boy had been observed fishing for a mop the previous week using some of the branches he had been given. We will never know the answer for Boy is not telling. The whereabouts of this stick remain a mystery even to this day. It was a triumphant day for Boy and another learning experience for us humans: never underestimate the intelligence of an orangutan.