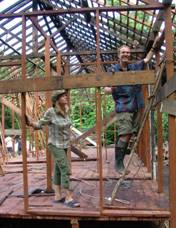 An exclusive peek into one of Borneo’s deepest mysteries.

Sources close to Orangutan Foundation International (OFI) report that three groups of foreign “volunteers,” AKA bule (pronounced “boo-lay”), were seen wielding hammers, saws, chisels and other hand made tools in the forests of the Pasir Panjang Care Center and in world famous Camp Leakey this summer. From the questionable skill set and abnormal enthusiasm of the strangers, observers found it hard to believe these “volunteers” knew what they were getting themselves into. It is believed that they were a part of a peaceful group called the OFI Volunteers Club which was present in Kalimantan to help the work of Orangutan Foundation International.

It is believed that individuals in these groups put everything in their lives, from work, to relationships, vacation time and other “stuff and junk,” on hold in order to participate in what has been described as “heroic” construction efforts. Trained on the spot, these dedicated activists, schoolteachers, fashion designers, students, moms, and software programmers, quickly became skilled laborers. Local witnesses testify, with some amazement, that the structures built by these boot-camp enthusiasts stood the test of orangutan curiosity and none-too-friendly jungle conditions (falling trees and flooded swamps among the regulars). Insider information right from the volunteer base camps confirmed that these individuals were not held under threat of pain and death; in fact, they repeatedly missed easy opportunities to escape from the former zoo (bought and closed down by OFI in 2008) where they were housed in primitive conditions.

We caught up with the self proclaimed leader of these laborers, Janie Dubman, to try to gain some insight into the inexplicable motivation behind these groups’ actions:

RL: So Janie, what brought you and these groups of volunteers to Kalimantan this summer?

RL: What was purpose of the work you were conducting?

JD: We share a vision of secure forest habitat and good quality of life for all orangutans in Kalimantan. We felt like getting our hands really, REALLY dirty (and sustaining a few injuries). This brought us one step closer to realizing our vision of orangutans surviving in perpetuity in the wild.

RL: How does the volunteers’ work help OFI?

JD: Well, it amuses the staff and provides visual enrichment for the orangutans. I guess it is also a huge aid for the rehabilitation program because the bridges we build allow the caregivers to release the orangutans year-round even when the swamps are flooded. (It doesn’t matter so much for the orangutans, but the caregivers sometimes end up thigh deep in the swamp mud.) And the renovations we did at Camp Leakey improved the living and working conditions for the researchers and rangers who live there, not to mention giving the dear historic station a fresh sparkle.

RL: How does this help orangutan conservation on a larger scale?

JD: Rehabilitation programs rescue wild orphans who have had their freedom forcibly taken from them and return them to the wild; and supporting research in Camp Leakey fosters understanding and appreciation of wild orangutans and their jungle habitat.

The south of Kalimantan Tengah (Central Kalimantan) buzzed this summer with reports of these strangely attired and shockingly dirty “tourists” in locations which seemed each more unlikely than the next; riding and whooping in cattle trucks during the soccer World Cup, dancing and eating at multiple weddings, and drinking out of kettles on top of roofs in research camps.
So despite their odd customs, these multinational groups appear to be a tremendous work force and influence for OFI, and we have been advised that as long as likeminded individuals continue to make the bold decision to join, they will continue to return each summer.

Thank You to the 2016 OFI Construction Teams!