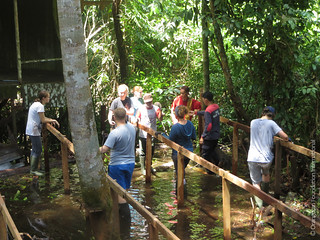 Every summer, teams of volunteers are organized to assist Orangutan Foundation International with critical construction projects which help us continue our work to save orangutans in the forests of Borneo. Every project has an impact on the well-being and lives of both orangutans and staff members. So the only question is, where to begin?

Team 1: “Cabe Rawit”
With the arrival of the first Volunteer Construction Team to Borneo, we selected a small project due to the small size of the team. We began with repairs and maintenance to the “fruit house” at Camp Leakey, a modest but important undertaking as well as re-building the “garbage shed.”

Camp Leakey is the historic research camp which Dr. Galdikas, with her then husband, Rod Brindamour, established in 1971. Today it consists of a number of wooden buildings housing approximately 25 local OFI staff members, some of whom patrol the forest and provision the feeding platform while others continue the wild orangutan research under Dr. Galdikas’ supervision. In addition, Camp Leakey is now open to tourists for three hours each day when fruits are offered to free-ranging orangutans on the feeding platform. The fruits for feeding time are delivered to the camp once a week by boat from the neighboring town of Kumai, and then stored in the fruit house. When the boat returns to Kumai, it takes with it the garbage from the different OFI camps along the Sekonyer River to then process in town. In the meanwhile, the garbage sits in a shed that needs to be orangutan-proofed, macaque-proofed, and pig-proofed as all of these animals are interested in the smelly and colorful pieces of garbage!

We took apart the garbage shed and rebuilt it, slightly larger than before, on the same spot. It was a challenge but, with the help of our two local carpenters, Pak Labung and Pak Ucuk, we were able to do it. They worked morning, noon, and until the late afternoon so we followed their example and did as well, trying to keep up with them.

The fruit house construction was seemingly also a great challenge for this one-person “team” of Jennifer, who would be working in a remote place without the diversity of skills of a full team. But she rose to the challenge with patience and enthusiasm. Nobody thought such a small team could get so much accomplished in three weeks. Of course, the two local carpenters were instrumental in facilitating this much-needed construction

The fruit house happens to be the old “Typing House” where Dr. Galdikas and the staff typed up their notes and reports on two typewriters. The painting of an orangutan with arms and legs outstretched on the outside of the building is something of a Camp Leakey icon. So before beginning construction on the old Typing House, we had to find a way to keep the iconic image visible. Fortunately, Communications Volunteer, Deya Ward Niblett, had a refined drawing hand. Over several days she drew the icon on the new boards on the front of the new Typing House which helped us finish the work!

By the end of three weeks, we had finished the two buildings! After accomplishing so much with limited hands on deck, the name of this year’s first team was born: ‘Cabe Rawit’ or “Mighty Chile Pepper.” The name was partially chosen since chile peppers tend to be small but mighty in their effects.

Team 2 “Swamp Monsters” & Team 3 “The Bangers”
The project for the next two teams had been pending for at least 3 years, and thanks to the Volunteer Construction Teams, it finally came to fruition: repairing the Proboscis Monkey Sanctuary boardwalks.

The site of OFI’s Proboscis Monkey Sanctuary was formerly used as a privately owned for-profit zoo. Dr. Galdikas tells an interesting story how she purchased the zoo for OFI in order to rescue the animals and close down the zoo. This is a story for another time.

The zoo was actually located in an old peat swamp forest on the edge of town. In addition to caged captive animals, wild animals ranged free in the trees above, including a resident troop of proboscis monkeys and occasional wandering wild orangutan males. The zoo with its forest and with all captive and free-ranging wildlife was purchased by OFI in 2008. The captive animals and birds were either released or moved to OCCQ for care. The one gibbon was sent to a gibbon rehabilitation center near Palangka Raya. Today, only a troop of macaques as well as a wild troop of free-ranging proboscis monkeys remain. The proboscis monkey troop often sleeps in the zoo forest at night while the macaque troop sometimes comes back as well.

In the future, OFI plans to transform the sanctuary into an education center, open to locals and tourists. The center will be a resource of information about orangutans, the forest, and OFI’s ongoing work. Nestled in beautiful old peat swamp forest, the existing old traditional ironwood house could become a fitting museum for OFI.

The teams began with repairs on the existing boardwalk from the sanctuary entrance to the main house, and then up to the small river that marks the perimeter of the land. (OFI had purchased another 2 hectares of forest across the river boundary. Unfortunately, this forest was totally devastated by the horrific fires of 2015. OFI is currently reforesting the area with several hundred tree saplings.) In order to rebuild the boardwalks and platforms, both teams had to brave the swamps every day. Sometimes ankle-deep and sometimes thigh-high, the water would fill our gumboots with foul-smelling, black acidic swamp water!

The teams also endured nearly constant rain and clothes that never dried. They had to overcome any fear of spiders (each team was visited by a tarantula-looking spiders), and of bats, leeches, and cockroaches. These challenges were minimal for the teams, however, since their members all showed a value for teamwork, and a strong sense of humor. Patience and laughter were hallmarks of the three-week experience.

The second team faced the difficult task of rebuilding the boardwalk leading up to the house they were staying in. This led to the identifying team name of “Swamp Monsters”! While the third team also spent many days entrenched in the swamps, they self- identified as “The Bangers” due to all the nails that had to be banged to repair the platform in front of the house.

OFI is indebted to these passionate and caring volunteers who crossed the world to give us a hand in our mission to protect orangutans and the forest. If you would like to be a part of an OFI construction team in 2018, please visit orangutan.org/volunteer for more details on our volunteer programs and how to apply.